While the 70th anniversary of D-Day got fairly extensive coverage recently, I've seen pretty much nothing about the fact that it's also 70 years since the battle of Kohima-Imphal, the most significant battle of the Second World War in south-east Asia. It's not too difficult to discern the difference in coverage, as fighting to liberate France from the Nazis has very different connotations to fighting in order to keep Burma British.

Nonetheless I feel I should mention it, as my grandfather on my Dad's side was there, with the 2nd battalion of the South Lancashire Regiment. This article suggests that there are now only three surviving members of the Burma Star Association, although, of course, the vast majority of Commonwealth troops in the battle were Indian. Also, Dad tells me that Grandad never actually joined the Burma Star Association, believing it to be full of clerks and other rear-echelon types.

Posted by Stephen at 9:31 pm No comments: Links to this post

Borrowing a trick from Blood & Treasure, an article over at the Guardian suggests that Manchester was destined to be the recipient of "one or two 'airbursts' of up to five megatons" in the event of war with the Soviet Union. The Nukemap website suggests the following effects for a five megaton airburst over Manchester: 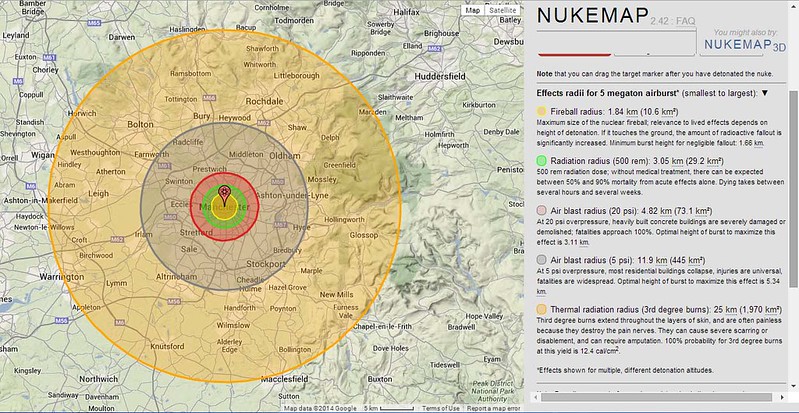 Heaton Chapel is just to the north-west of Stockport, so I don't fancy two year-old me's chances very much.
Posted by Stephen at 4:28 pm 1 comment: Links to this post
Newer Posts Older Posts Home
Subscribe to: Posts (Atom)